Travel and features journalist, Lydia Bell and five-year-old Havana are invited to experience the latest family offerings at Pine Cliffs, A Luxury Collection Resort in Portugal.

"Mummy, it's very nice to be here, this is the best hotel I have ever been to," declares my five-year-old daughter Havana, who is eating chips in the sun and has been bedazzled by the promise of the choice of no less than six swimming pools. Indeed, it is nice for me to be here too, with her, and with my childhood friend (and her godmother), her older daughter, my goddaughter, and Havana's best friend, her little sister. I am relishing the Yves Klein blue July sky, and the promise of ocean and seafood.

Pine Cliffs, A Luxury Collection Resort, is a force to be reckoned with. Despite being a stone's throw from the raucous beach town of Albufeira, it is an enclave unto itself, a seven-hectare six-pool uber-resort which has at its heart a hotel composed of a constellation of rangy manicured gardens with pools, prettily tiled courtyards, restaurants and glowing-white buildings which fold in shops and boutiques and gym and indoor pool. This fans out into outlying areas that include the Porto Pirata & Junior Club for children, an Annabel Croft tennis academy, a nine-hole cliff top golf course bang on site with incredible sea views, a residential villa enclave and further restaurants (there are 11 on the complex in total). If you take the lift that shuttles down the sheer orange cliffs and follow the boardwalk you'll end up on a wild Atlantic Beach with realms of loungers and shade and a dedicated resort beach club that's also open for dinner.

The new jewel in the crown - and where we are staying - is the Pine Cliffs Ocean Suites, a collection of minimalist, high-spec sleek-lined one- and two-bedroom butler-serviced apartments with proper kitchens and living spaces, and huge bedrooms with integrated bathrooms with egg baths - plenty of space to spread out essentials such as loom bands and Hama beads. They represent a new luxury benchmark for the hotel, and offer the option of self-catering within the fully serviced hotel context. Plus, the management tolerate three girls under ten sprinting through the corridors yelling whenever they got the chance. Downstairs, parents book themselves into the new 11-treatment-roomed Serenity, The Art of Well Being spa, which has thermal pools to wallow in and a zen garden dotted with loungers.

Chelsea-based interior designer Lynne Hunt, a specialist in unostentatious contemporary hotel luxury, has taken charge of the freshening up of the 217 room-and-suite hotel. She has added pretty touches to the hotel's unadorned aesthetic, such as the ubiquitous decoration of azulejos - Portuguese hand-painted tiles - found in the public spaces as well as the decorated headboards behind the beds in the rooms. 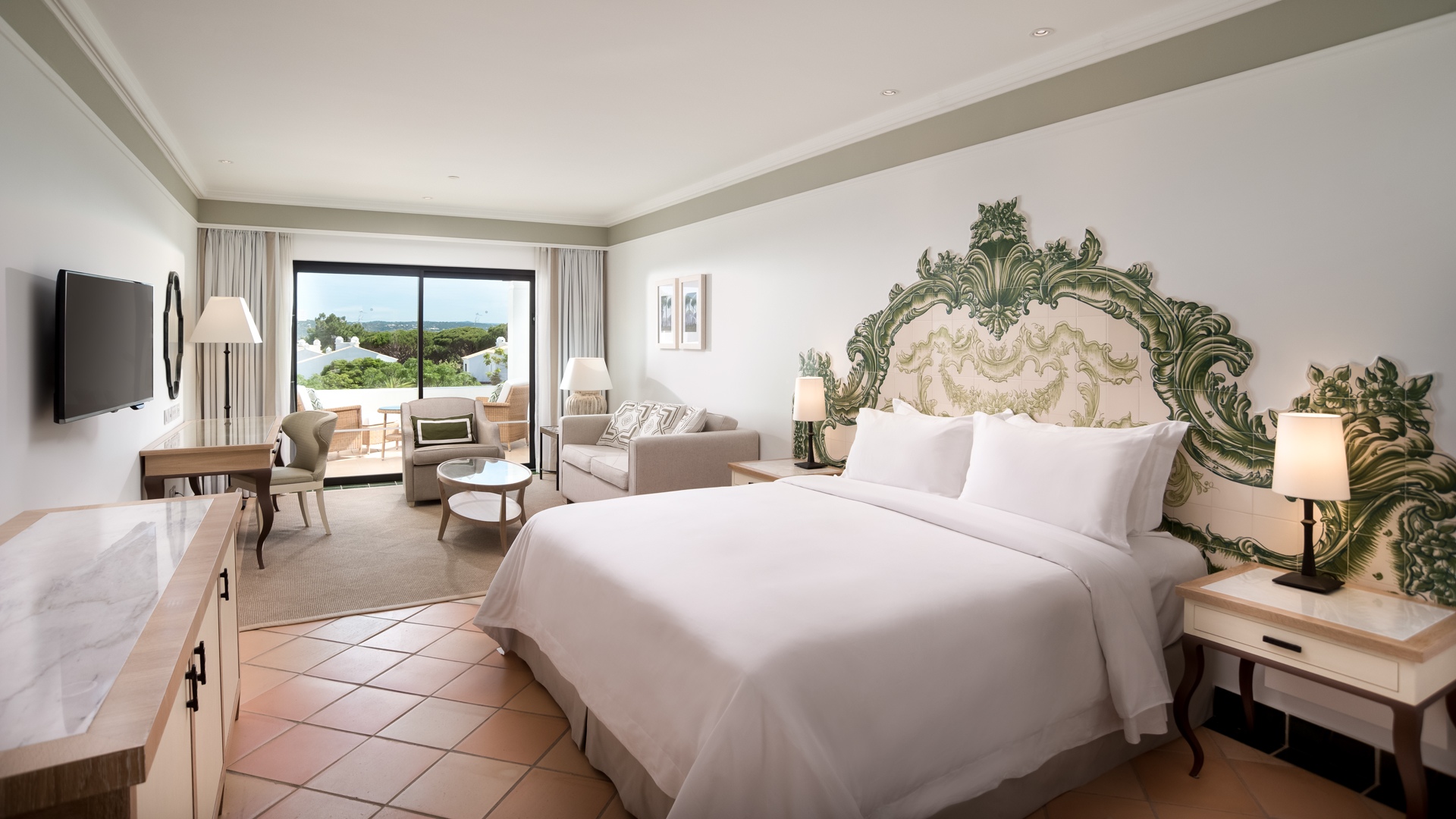 Pine Cliffs is heaven for children. My daughter is anxious to try every single one of the pools that have become her obsession and I must say all three of the children are way more focused on this important activity than either playing on the beach or taking part in the activities at the children's club. But they have lots of fun playing games in the club; playing in the pool there, because it's so shallow and easy to frolick in; and watching the reptile show, admiring the giant iguana and friendly tortoise and laughing at me running away from the reptile handler who tries to place a Burmese python around my neck. Other kiddie-friendly touches include the placing of children's dressing gowns and slippers in the rooms; the same children's menu being present at all the restaurants (for the routine lovers in our midst); the constant presence of an ice cream cart and the possibility of borrowing giant rubber rings from the towel boys (Havana's most beloved was a giant blow-up crocodile she refused to get off all day, even for lunch). 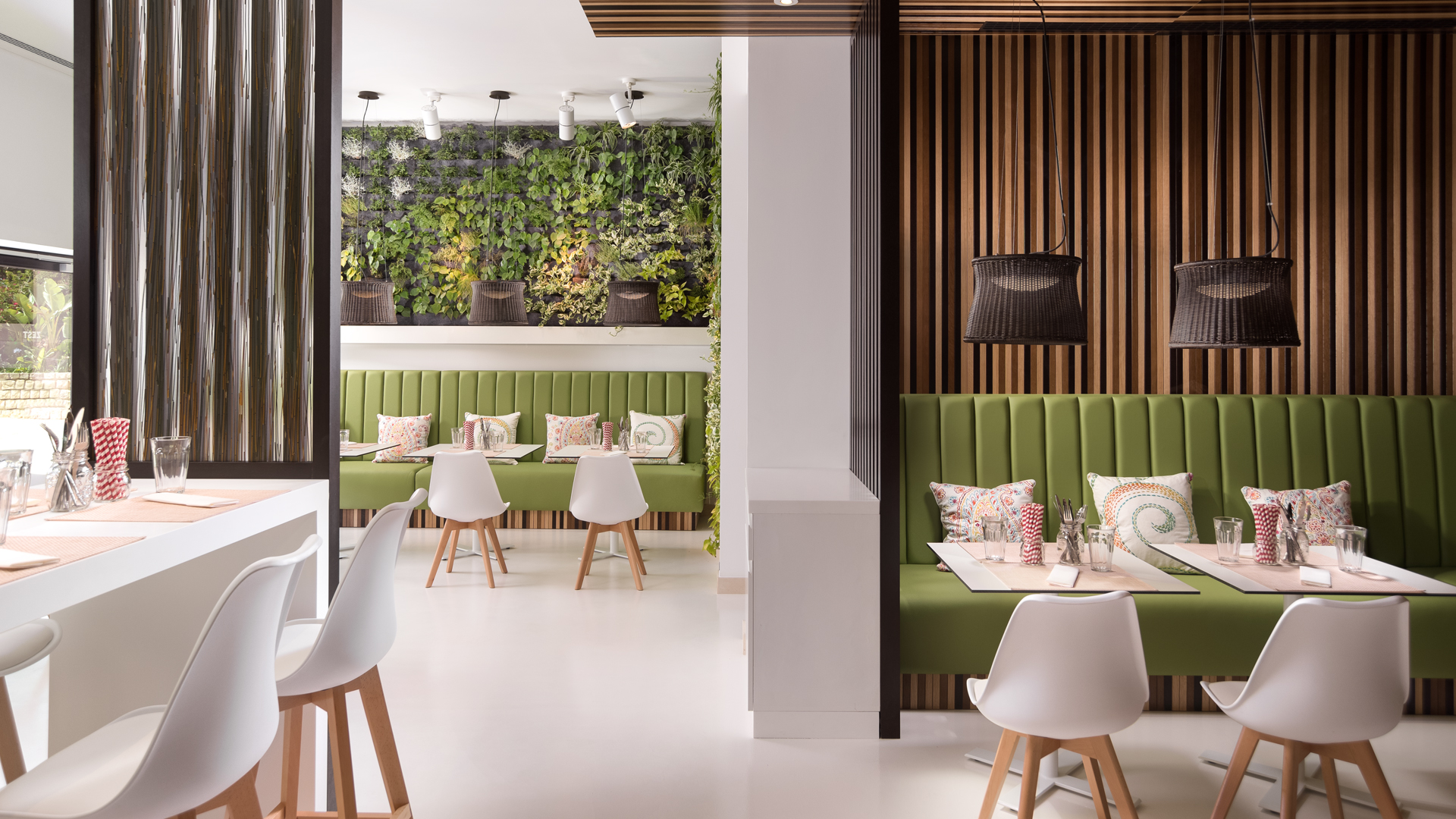 The restaurants include straightforward poolside family eateries, buffet restaurants, the Piri Piri steakhouse, a Japanese option, seafood fine-dining, and Zest, a super-healthy spot for post-yoga brunches and lunches. They do have a kids' menu here, but I recommend going here for a moment of solitary civilized adult peace, creative juices and superfood salads instead. Elsewhere, my favourite is fine-dining seafood option O Pescador, with its top-notch Cataplana - a traditional Algarvean dish of monkfish, clams, prawns, chorizo and tomatoes cooked in a copper pan. I recommend planning out your week in food at the beginning and making all the necessary arrangements - things do get booked up.

After four days, I can see why people book this place for their flop-and-drop summer jollies. For golfers, it's catnip, and spa-lovers are now catered for too. There are enough restaurants to ensure you'll never get bored, and there's a smorgasbord of swimming pools for those who prefer pool to sandy beach (but there's beach on tap, too). There's a kids club on site, and enough gym classes to cater for those who cling to a fitness regime.

Everything is on hand, and thinking - especially about whether the children are happy, or well fed - is unnecessary, as someone else is doing it for you.

I didn't get much else out my daughter for the rest of the trip. She was mainly oblivious to me, focused as they all were on being together, and being in the pool during all waking hours. And so we mainly watched them, talked and drank watermelon daiquiris. It was parenting lite, and for a short while, there's nothing not to like about that.

> Find out more about Pine Cliffs, A Luxury Collection Resort