A meditator, a tradition, a national treasure, a legacy: a cup of tea goes far beyond simple enjoyment.

We find comfort in drinking a cuppa and right now we’re drinking even more tea whilst isolating at home and working remotely. But it’s easy to miss the history, art and complexity that underlies such a simple pleasure. Storytelling and gaining a deeper understanding of how tea has travelled through the centuries, across the globe and making its way into our lives and traditions, can add layers of meaning to our pleasure – it becomes not just a drink but an experience.

We have the Chinese to thank for the idea of drinking the soothing beverage. Legend has it that Emperor Shen Nong discovered the energising and refreshing effects of tea in 2737BC, when some leaves fell into his cup of hot water. In the beginning, it was regarded as a therapeutic infusion brimming with antioxidants; although initially available to royalty and the rich, it quickly became a daily custom for those living prosperous lives. From the 10th Century onwards, China started to first export its tea to neighbouring countries, but it made its way to Britain much later.

Already becoming commonplace in Europe, Thomas Garraway was one of the first merchants to start serving tea at his London coffee house in 1657, but it became more established when Catherine of Braganza - the wife of King Charles II - brought over flavoured leaves from Portugal. This instantly started a 'tea trend' among the 17th Century British aristocracy.

When the birthplace of tea could no longer keep up with the growing demand, India took advantage of the situation and began the first real commercial production of the beverage. Recognised as pioneers, explorers and innovators, Britain's East India Tea Company revolutionised the industry and facilitated the colonisation of much of this part of the world. The first English tea garden was established in Assam in 1837, with numerous tea plantations soon rolled out across the country. Today, India produces and consumes more tea than any other nation in the world.

Here we take you on a journey to discover five destinations that have played a significant part in this history and their intriguing tea rituals, ceremonies and experiences...

Originally a hub for coffee production before the crops were decimated by a fungal disease in the 1870's, Ceylon quickly adapted to produce tea. The first leaf landed on Sri Lanka's shores in 1824 and 23 years later, British planter James Taylor created the country's first tea plantation. From an initial 19 acres in size, the plantation grew steadily until the industry began to soar, paving the way for the rise of the Ceylon blend.

Ceylon Tea Trails is perched on the hillside of this extraordinary tea region. Here, you will find four distinct bungalows, each decorated with quintessentially colonial furnishings. Traditional Bed Tea is served by a butler each morning whilst guests gaze at the breathtaking panoramas of Sri Lanka's central highlands; recognised as a UNESCO World Heritage site.

The essential Tea Trails Experience is a unique human connection to a family generation of tea production. It is led by James Taylor, the great, great grandson of the founder of the famous Taylors Tea brand. Learn first-hand the age-old tea making process – from discovering the 'two leaves and a bud' rule of tea picking to exploring the factory where the fresh leaves are converted into black tea ready for sampling. 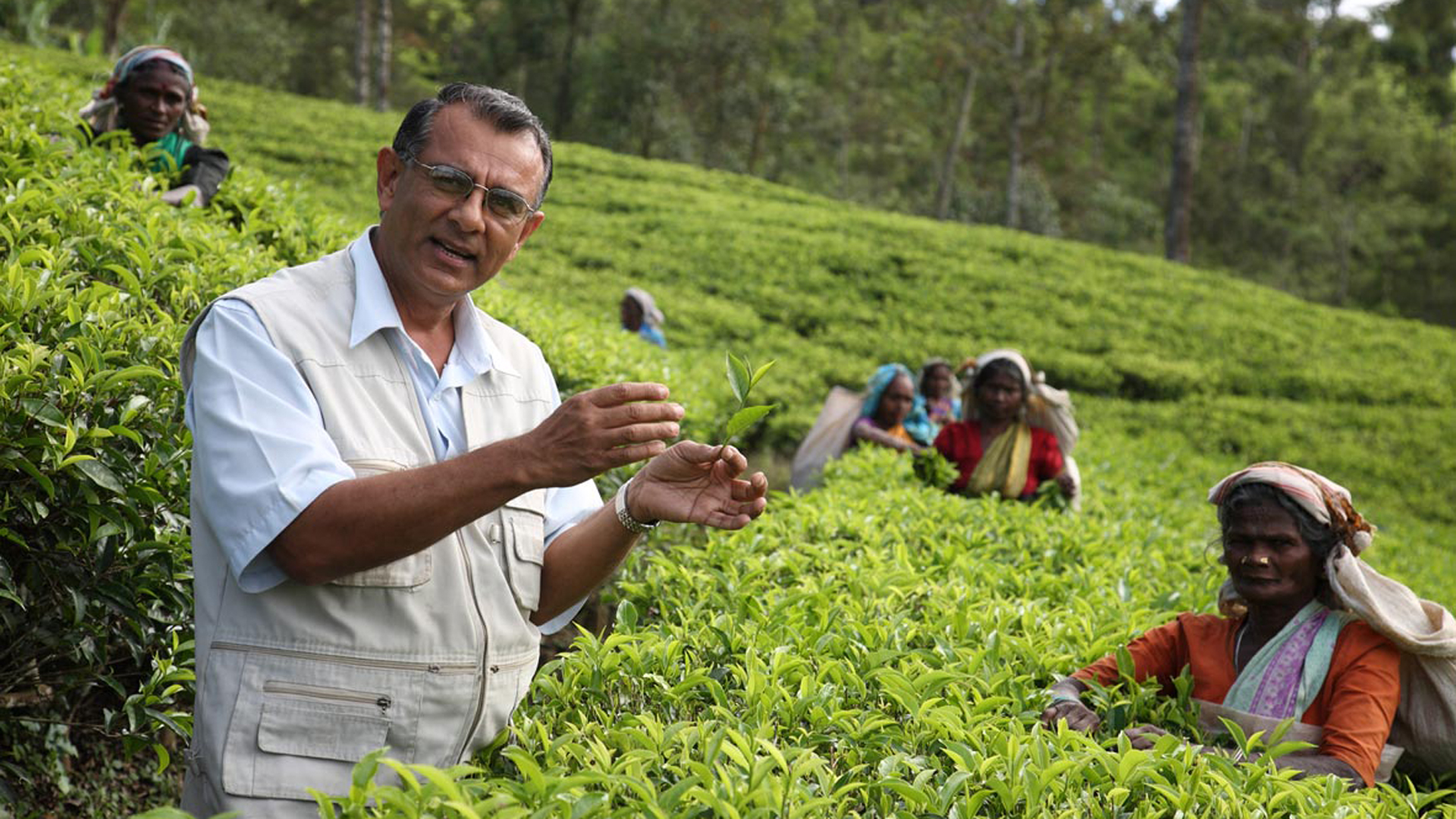 In Singapore, afternoon tea has been elevated to an elaborate affair becoming a high point of self-indulgence and affordable luxury. The quality, quantity and variety of the food on offer accompanied by unparalleled scenery in which you can enjoy it are in a league of their own. The great hotels of Singapore employ the best pastry chefs, access the most exquisite ingredients, and fight it out to produce the most elaborate and luxurious teatime in town.

One such teatime is at Mo Bar in the Mandarin Oriental. A truly dramatic setting with views of the city skyline is heightened by a tea tasting experience that is both sedate and luxurious. Mandarin Oriental partners with Singapore based TWG tea company that offers teas of unrivalled quality. They have cultivated relationships with tea growers worldwide to ensure exclusive access to the world’s most sought after gardens in the most remote and mysterious regions. 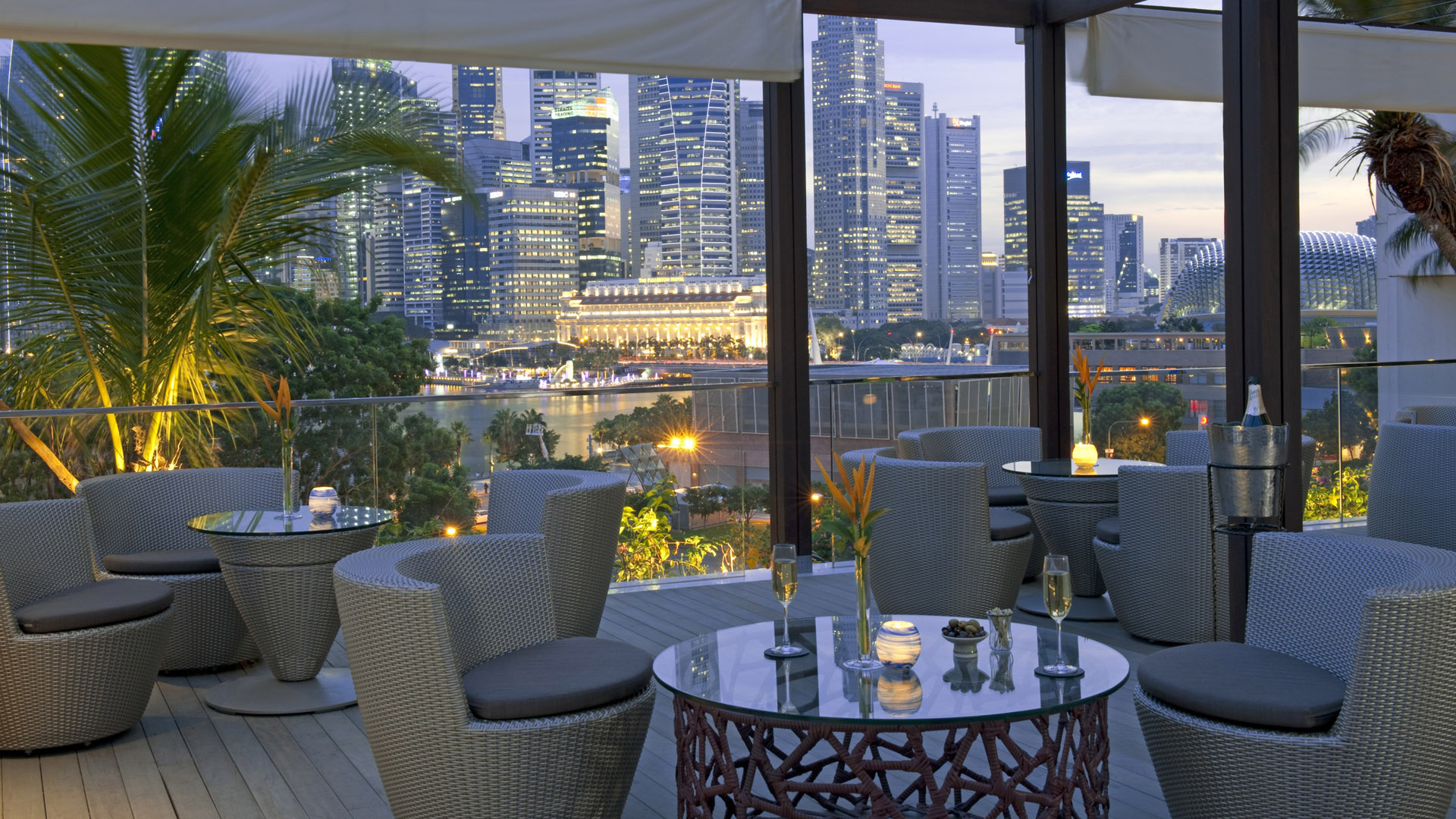 3/ An English classic in the Caribbean

The Caribbean is also renowned for embracing English heritage and nowhere more so than Barbados. Known worldwide as the 'England in the tropics', its strong British legacy has meant that colonial traditions are still firmly interwoven into Bajan society. Reflecting the island's imperial background, Cobblers Cove serve a complimentary daily afternoon tea for guests in the Pavilion at the Great House. An elegant and idyllic experience with azure waters as your backdrop, while sipping on a selection of caffeinated and herbal teas. To find out more about the organic ingredients used here and in the tea menu; take a guided garden tour, observing the chef harvesting produce for use as part of a live demonstration.

4/ A taste spectacle in South Africa

Journey across the Atlantic to Africa, now the fourth largest producer in the world even though tea is a relatively new crop on the continent. Almost every country in Africa now grows at least a small amount of tea, with the most common crop for use in teabags. Tea is enjoyed by locals and visitors as a refreshment, it is also often served with meals and offered as a show of hospitality to welcome guests. South Africa’s regional speciality is Rooibos tea, a herbal brew prized for its health-giving properties.

Following a fitness boosting hike accessible straight from your room at The Oyster Box in Durban, return to a lengthy and leisurely high tea. In this boutique hotel, a grand table is dramatically centred to provide a visual taste spectacle among the opulent surroundings of the The Palm Court Restaurant. Laden with an abundance of sumptuous treats, sit beneath the glistening chandeliers purchased from the Savoy Hotel in London and indulge in the freshly baked scones, gold leaf éclairs and colourful macaroons whilst listening to the harmonious chords of the talented, in-house pianist. 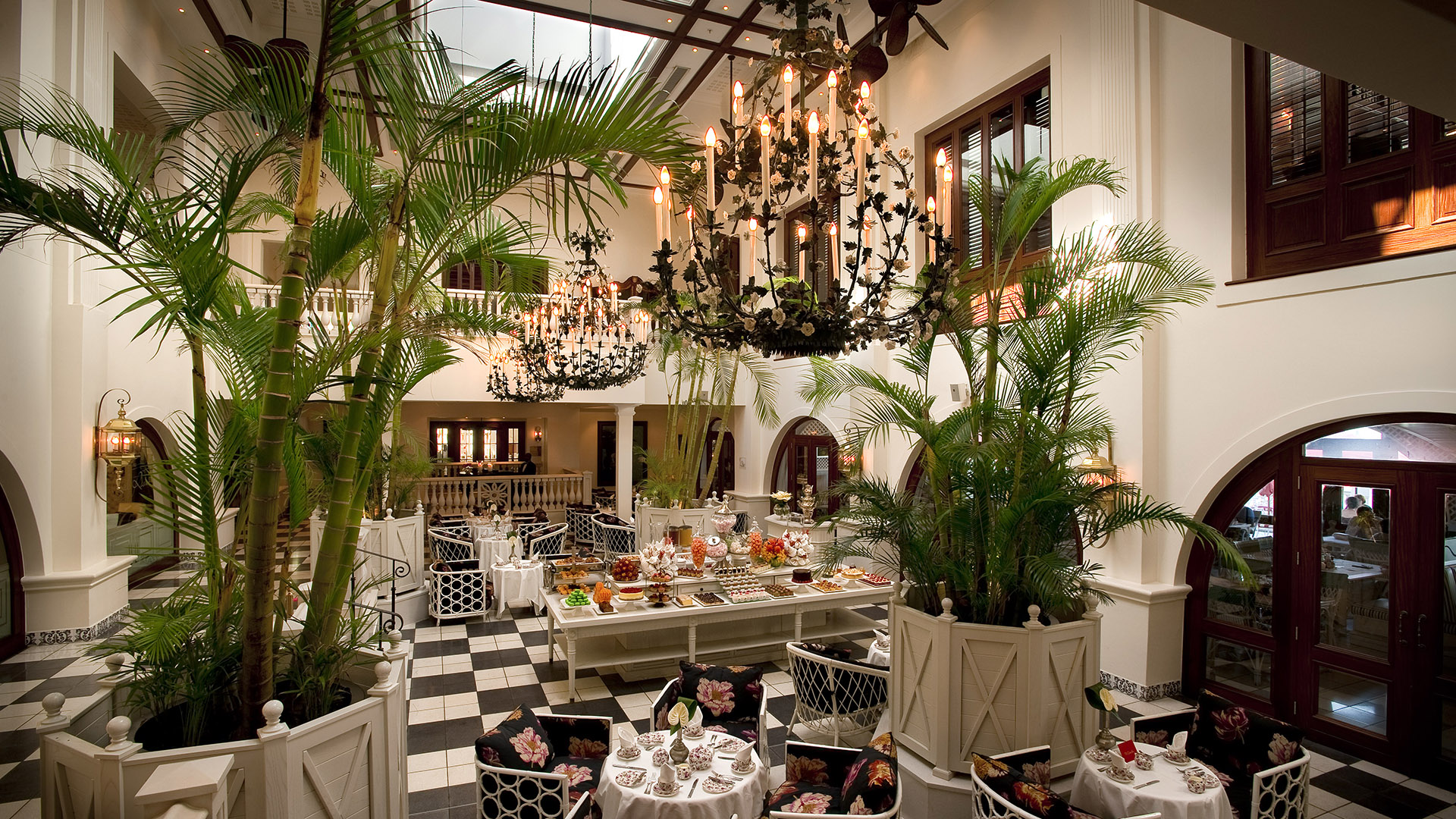 North of the African continent, unearth the origins of naa-naa – the renowned Moroccan mint tea. During the 18th Century, a British merchant found himself in Morocco with an abundance of Chinese gunpowder green tea. Moroccans were enraptured by the sensational flavours emerging from the leaves, especially when mixed with mint. Sweetened naa-naa rapidly became Morocco's national drink and was quickly established as a sign of friendship and hospitality.

The Maghreb tea ceremony is a sacred ceremonious ritual which is central to Moroccan life; customarily prepared as a welcome drink to honour guests. In the heart of the Red City sits Four Seasons Resort Marrakech, a calming oasis showcasing the finest Moroccan architecture. Nestled within this contemporary haven is the Maarifa Cultural Centre, a space dedicated to art and the cultural traditions of Morocco.

Watch as boiling water is skilfully poured from an intricate silver teapot over fresh spearmint, dried tea leaves, and sugar into ornate and fragile glasses from a height of around twelve inches. Learn this fine art before heading to Inara Lounge to be served your own Maghreb tea accompanied by authentic local sweet treats. 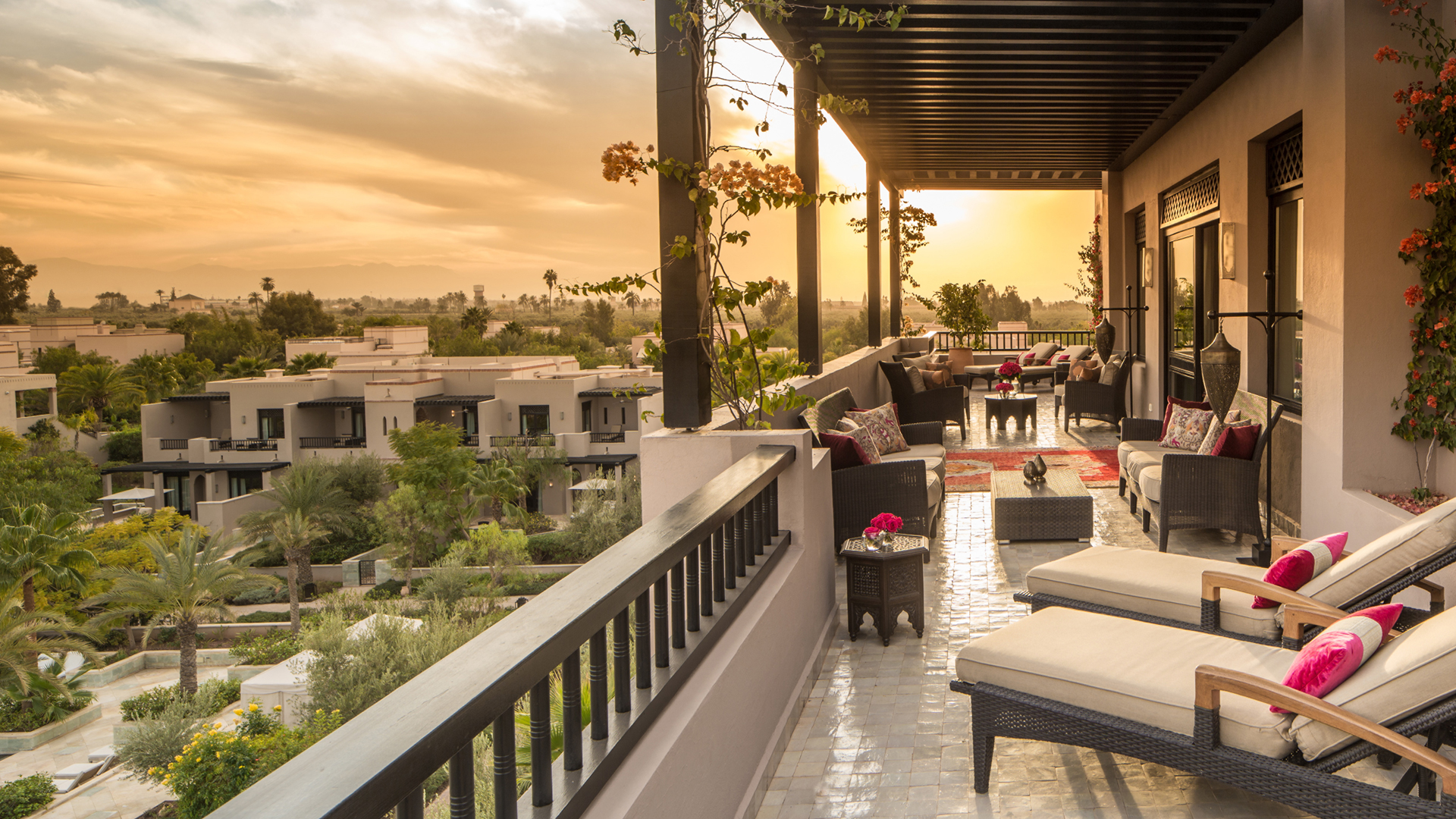 News / Why everyone is talking about self-care

News / Travel and its power to transform us

News / Bringing travel into your home...

News / Life without travel for the UK’s top travel editors

News / World on a plate

If you find yourself dreaming, planning and plotting for future travels, we can help.

Pick up the phone

Call us for advice or recommendations; we’re here to offer a human connection if you have any questions.